I was delivering a hat I had knit for my son to a friend of mine as it was a bit big for Ethan, but would fit her little guy better. She actually does my hair and is the owner of the salon I go to, and was generous enough to take $20 off my bill for the hat. It was really my first piece of knitting I’ve ever sold (!).

While we were talking at a coffee shop a friend of hers came over to say hi. It turns out he’s another small business owner locally. He commented on the hat and once she told him I had knit it, he got all animated and asked if I could knit a bigger one. All you knitters out there know what I was thinking, umm yea…of course 😌. But I just said yes, an adult size isn’t hard at all. He said he can never find a hat that covers his ears for some reason. And to that, I was thinking maybe instead of a 9 inch length he might just need 10 inches and a folded brim so he can customize it.

He asked if I’d knit him one with white on the brim and a big white pom pom and bright blue for the main color as those are his company colors. I said I’d be happy to do it (and I was). I guess the problem came in when I had to buy the yarn. I got a skein of blue Plymouth Merino and white Cascade 220. $28 😲 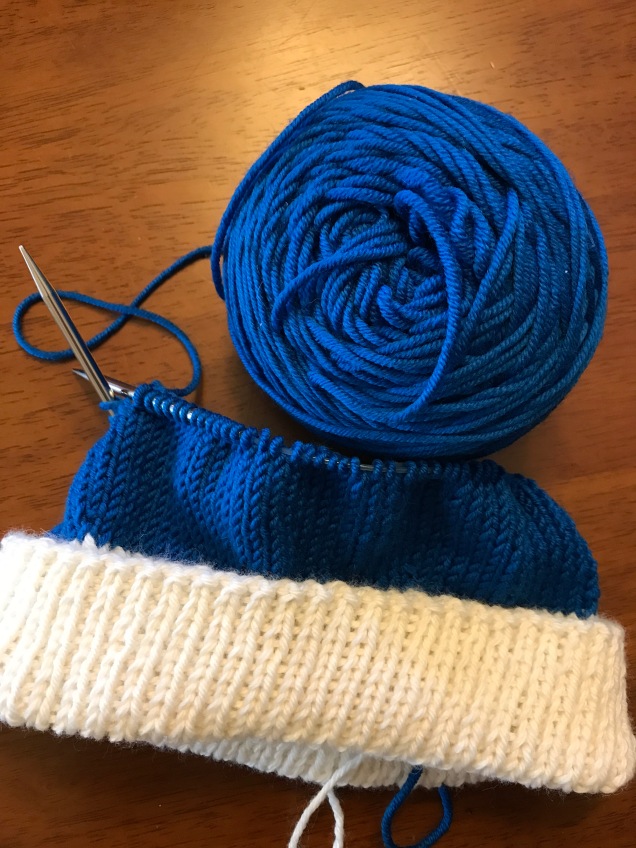 It turns out once I looked at what I had in my stash once I got home there was some white Berroco Vintage so I used size 6 needles and did a four inch brim. I feel like this yarn is more aran than worsted as the guage is significantly bigger than the worsted merino on size 7 needles. Anyhoo. Here it is finished, modeled by my husband.

Plenty big. Happy with the results. Now this guy is really a complete stranger so it was very awkward when we were figuring out when to meet and he asked how much for the hat. I had a $16 investment in the blue yarn and a few hours at least in knitting. I had gotten $20 for the kids hat so I said $25-30 but no pressure.

He gave me $30 which was generous, but then when I stepped back and thought about it I’m sure that was at least double what he was originally thinking when he first asked for the hat. I was able to return the Cascade, so I made $14. 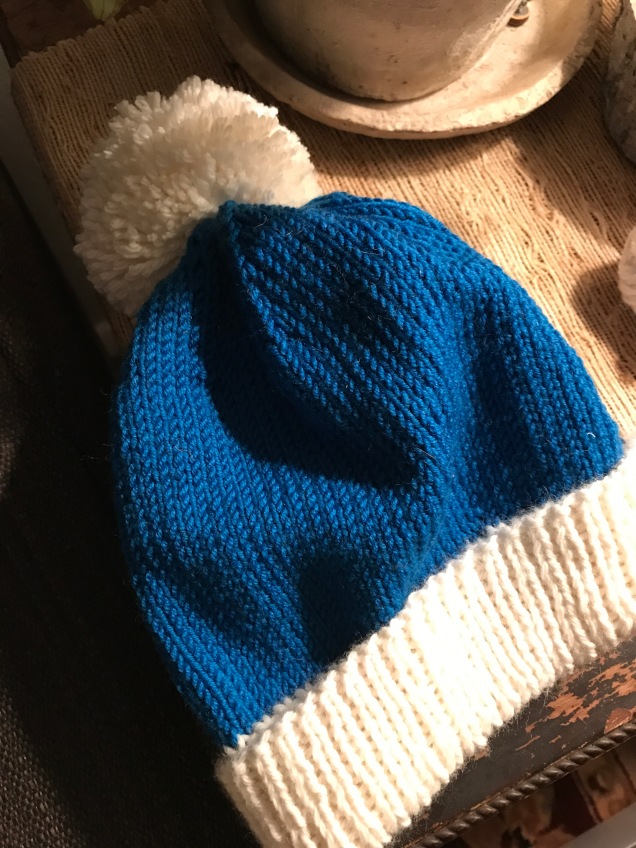